Carla Busuttil’s third solo show at Josh Lilley in London entitled The Super-Suburb Defence Authority touches on all of the ills that have infected South Africa since its colonial era. As a South African artist growing up under apartheid but living and working outside her home country since moving to London to attend the Royal Academy Schools in 2005, Busuttil is able to look back on her native land with a dispassionate and impartial lens, picking up on all of the developments and setbacks of a country struggling to cleanse itself of its apartheid history. 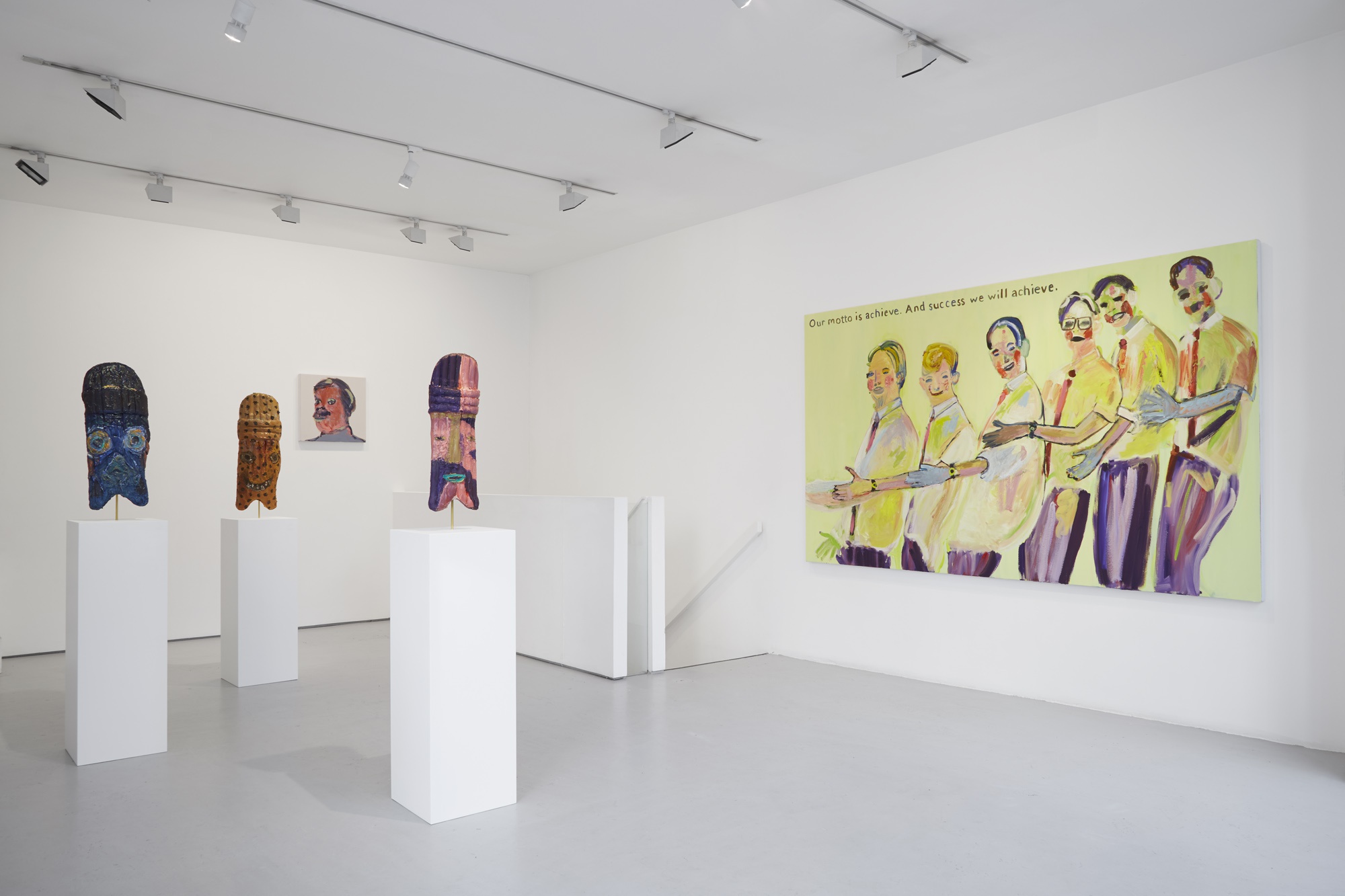 Consisting of painting, sculpture, video and bespoke artist wallpaper, this exhibition actively engages the viewer, whether interested in the politics or not, as the installation is a master class in exhibition making and the politically and culturally-charged subject matter is understated, drawing the viewers in instead of slapping them on the face.  In the first room of the exhibition, there is a large seemingly innocent painting of six school boys in their uniforms painted in a lurid yellow colour, with their school’s motto printed on the top left corner of the canvas: “Our motto is achieve. And success we will achieve.” Inspired by a school photo of the artist’s husband’s secondary school class in South Africa where he was forced to learn the Afrikaans language that only 13% of the South African population understands, this painting is quintessential Busuttil – revolving around the human form, painted in an abstract contemporary style, using a painterly brushstroke, and touching on the political landscape of a vibrantly coloured South Africa. In the same room, the viewer is confronted with four thickly-impastoed primitive faces reminiscent of African masks but painted on vintage cricket pads found in thrift shops in England, subtly pointing to South Africa’s colonial past.  Presented on traditional gallery plinths, these sculptures are all titled Nightwatchman, alluding to the overall theme of this exhibition exploring the South African private security industry that employs more people than the police force and army combined. 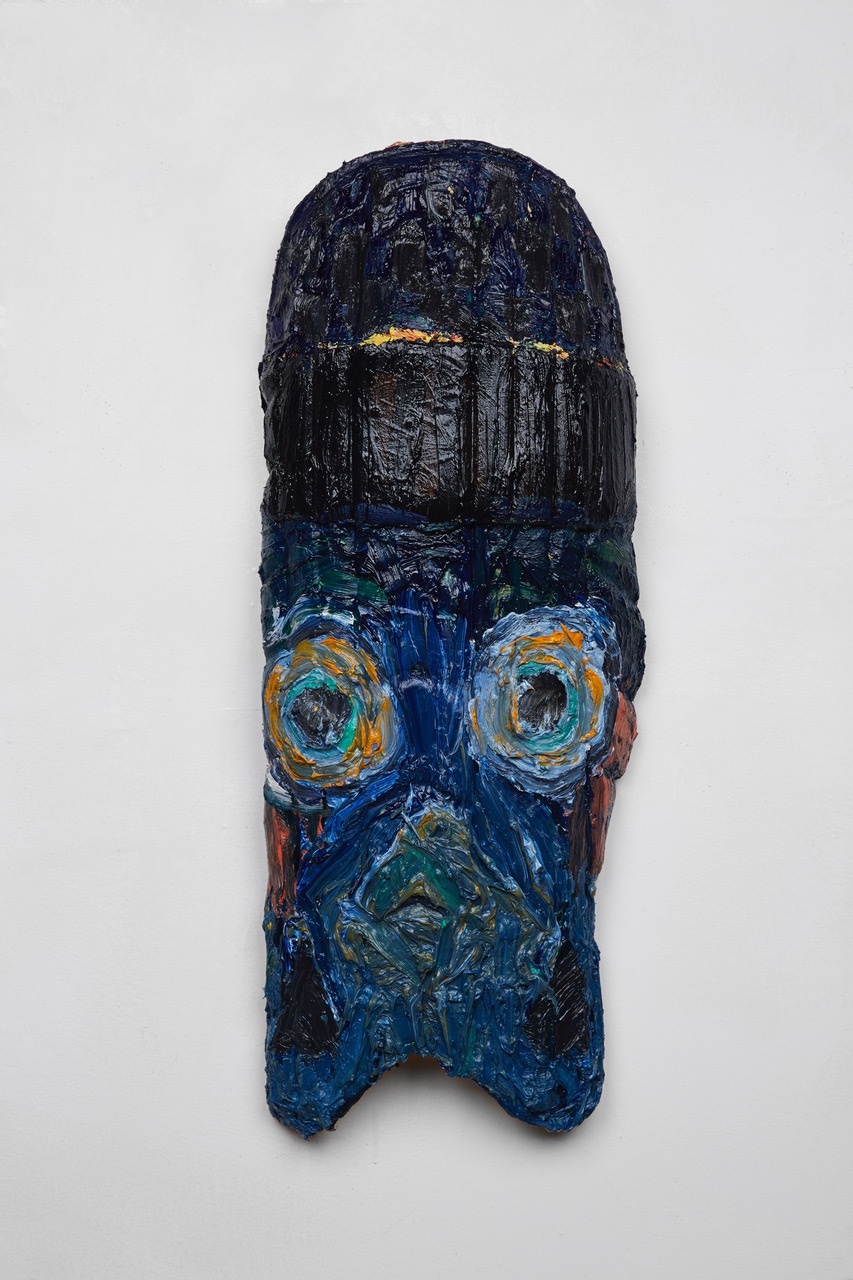 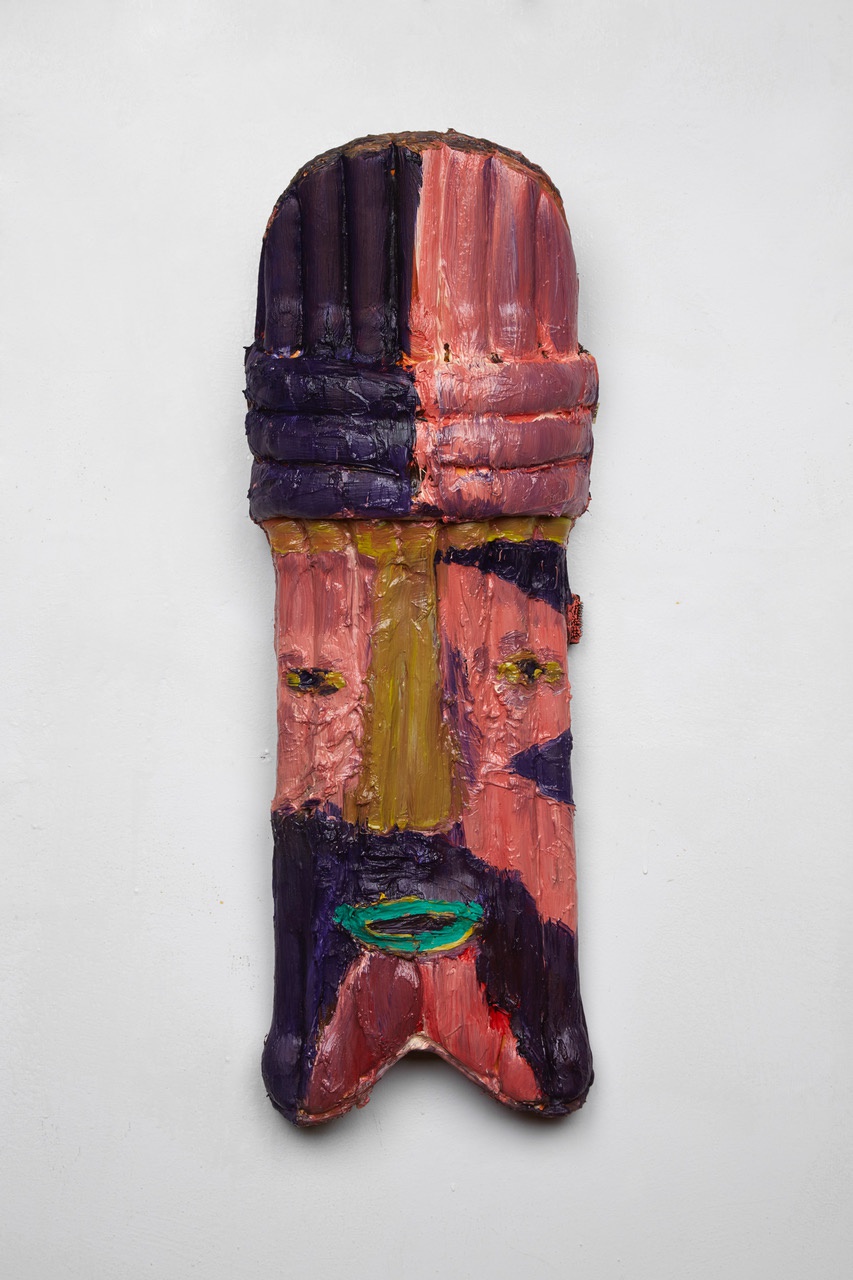 In the downstairs gallery spaces, another thought-provoking painting of a car park guard intrigues the viewer as the man’s face is painted blue, matching the painting’s ground and hinting at racial tension, social unrest and the giant chasm between the rich and the poor.  Continuing this leitmotif, Busuttil presents for the first time in the UK the video she produced after extensive research in Johannesburg called Mosquito Lightning, a parody advertisement of the private security firm the artist founded while on a residency there earlier this year.  Presented on top of bespoke artist wallpaper, this video work is equal parts humour and terror as the entire private security industry profits from fear and its amplification in order to fulfil its corporate promise to eradicate it. This emphasis on the fear of the “other” in society has universal applications at the present moment, whether it be president-elect Trump promising to ban all Muslims from entering the United States or the British majority who voted for Brexit this summer in order to stop immigration into the UK. So through Busuttil’s window with a view of suburban South Africa, the viewer has a glimpse of its own political realities in present-day London. 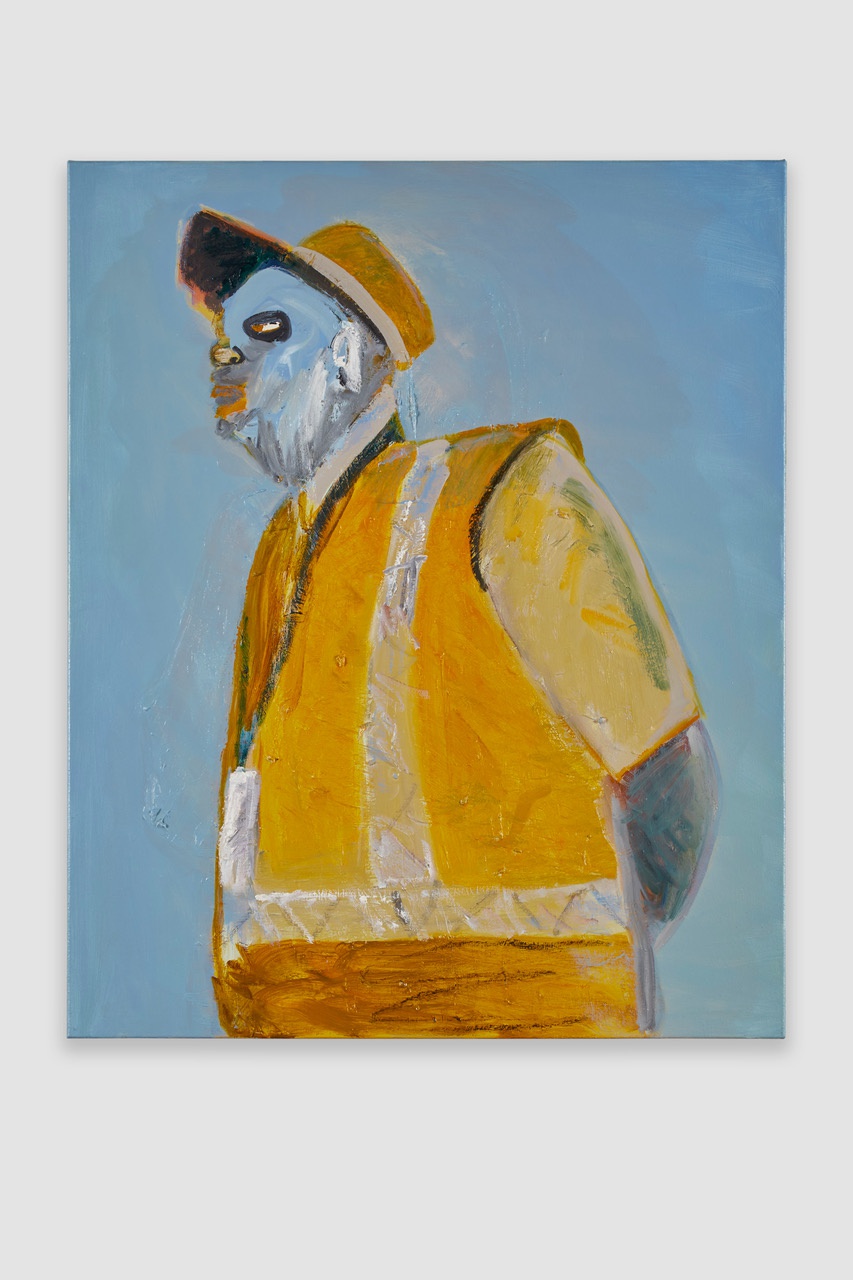 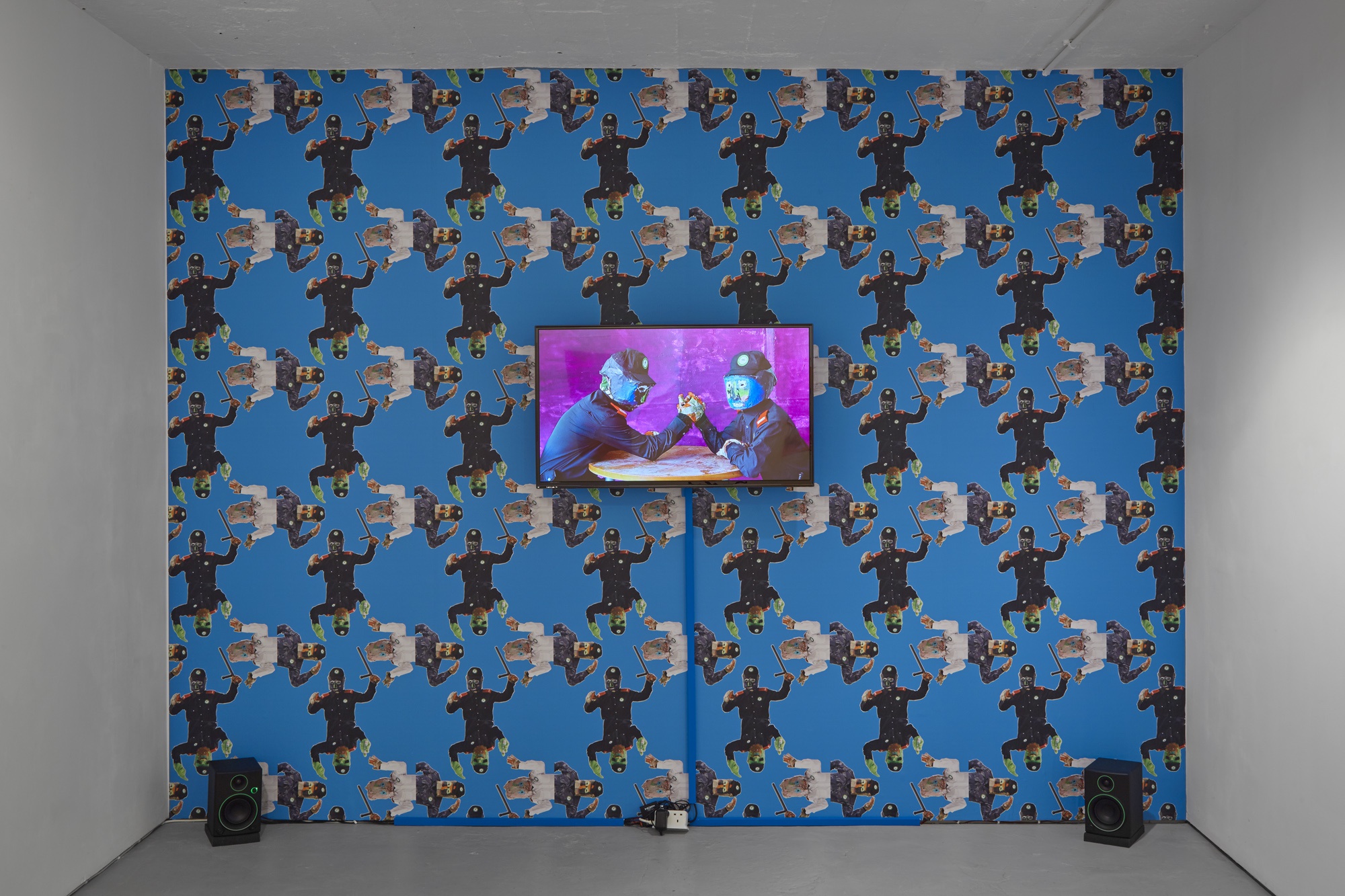 All in all, this exhibition is definitely worth a visit (on until 23 December 2016) for Busuttil’s tantalising painting technique as well as for its transporting qualities – from a grey wintry day in Fitzrovia to a colour-saturated, bright day in a privileged Johannesburg suburb.